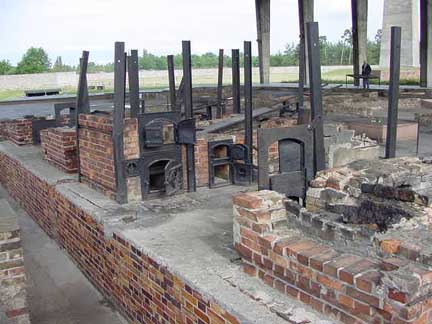 Ruins of 4 ovens, execution trench in background on the left

The photograph above, which shows the ruins of the cremation ovens in the former crematorium building at Station Z, was taken in the fall of 2002. In the background of the photograph, you can see a visitor looking at the map, which is on the east side of the ruins.

In 1953, the crematorium building was deliberately blown up by the East German government, and today nothing is left except the ruins of the ovens. When the former Sachsenhausen camp was made into a Memorial Site in 1961, the brick wall separating the Industrial Yard from the camp was moved so that Station Z could be located inside the memorial. The photographs on this page were taken in the fall of 2002.

On my first visit to the Sachsenhausen Memorial Site in the fall of 1999, Station Z was enclosed by a wire fence and there was no clear indication of where the gas chamber was actually located within the building.

The map at the ruins shows the location of the ovens and the route that was taken to carry the corpses from the gas chamber to the ovens. In the left-hand corner of the photograph above, one can see the obelisk, which is the monument to the anti-Fascist resistance fighters (Communists and Social Democrats) who were imprisoned at Sachsenhausen.

The ruins are covered by a large structure, held up by concrete columns which you can see in the three photographs below. This area was originally on the west side of the wall that separates the Industry Yard from the prison enclosure. A section of the wall has been moved back so that the ruins of the crematorium can now be accessed by visitors from the former prison enclosure, which is now the Sachsenhausen Memorial Site. 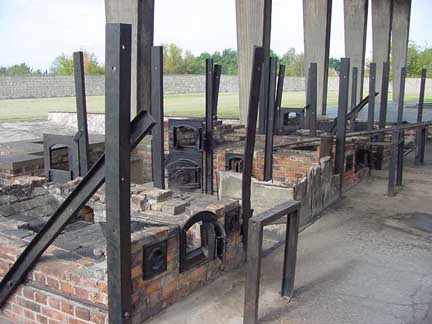 Front view of one oven, side view of second oven 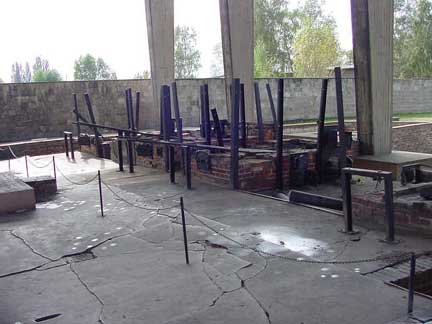 View of ovens, looking south towards Industry Yard behind the wall 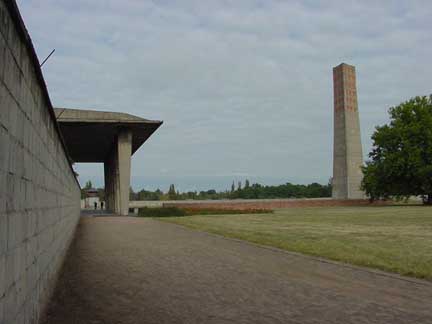 Industry Yard wall and Station Z on the left, monument on the right

The photograph directly above shows the large concrete structure which was built to cover the ruins of the crematorium at Station Z, the execution site at Sachsenhausen. The roof of the structure leaks and water from the rain the night before was dripping onto the ruins when I visited in the fall of 2002.

The wall shown on the left side of the photo separates the Industry Yard, where the inmates were forced to work, from the prison enclosure, shown on the right side. The monument shown on the right side of the photo was built in 1961 when the former concentration camp at Sachsenhausen was turned in a Memorial Site to honor the Communists and Social Democrats who opposed the Nazis. At that time, Sachsenhausen was located in East Germany, which was a Communist country.

Sachsenhausen was primarily a prison camp for political prisoners, German criminals and homosexuals; it was not intended to be an extermination camp for the genocide of the Jews. When I visited the Memorial Site in the fall of 1999, the blue and white flag of Israel was flying at Station Z. On my return visit in 2002, the flag was gone.