Memorial for the murdered Jews of Europe

The 19,000 square-meter Memorial for the murdered Jews of Europe, which was opened to the public on May 12, 2005, consists of 2711 stones placed on sloping, uneven ground in an undulating wave-like pattern, giving visitors the feeling of insecurity as though the stones were on unstable ground.

Visitors can enter from all four sides, day or night, and wander on their own through the maze of stones, as though visiting a graveyard with nameless tombstones. The columns are sunk into the ground to various depths and at some places, they are higher than the heads of the visitors. There are no set paths or sign posts to guide viewers. The memorial was designed by architect Peter Eisenman to deliberately disorient visitors by having all the stones tilted slightly and paths that are not level.

Completed Memorial site covers five and a half acres

On the west side, a row of 41 trees stands next to the Tiergarten park on Ebertstrasse, as shown in the photo above, which was taken by Bonnie M. Harris in 2006.

The photo below, also taken by Bonnie M. Harris, shows the Potsdamer Platz, a business district and shopping center, in the background. The second photo below shows the same view of the south end of the Memorial site when it was under construction in June 2002. 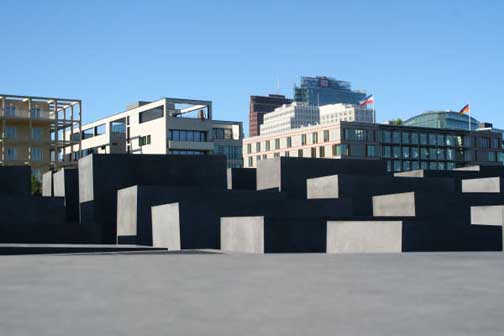 View of Memorial Site with Potsdamer Platz in background 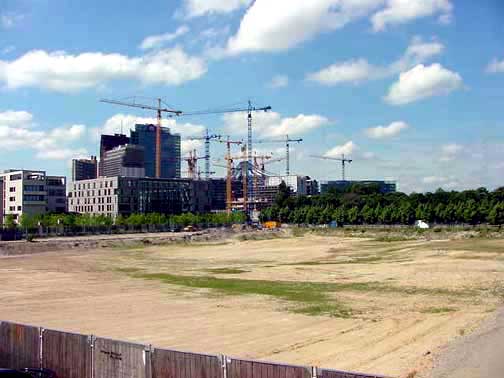 The site of the Jewish Holocaust Memorial in Berlin was formally dedicated on January 27, 2000 in a “symbolic event” which could not be termed a ground-breaking ceremony because the project had not yet received approval from the German parliament. The 27th of January is Europe’s international day of mourning for the Jews who were murdered by the Nazis.

The first dedication ceremony for the Memorial was held on November 15, 1993. Originally expected to be finished by January 27, 2004, the Memorial was dedicated on May 10, 2005 and opened to the public on May 12, 2005, exactly 60 years after Germany was liberated from the Nazis in World War II. 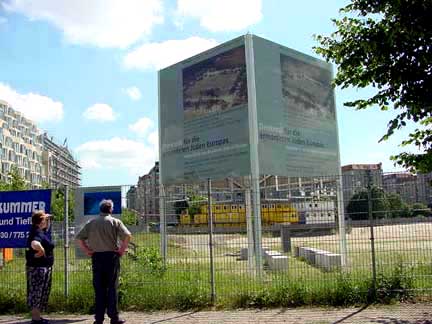 The design for the Denkmal für die ermordeten Juden Europes was approved on 25 June 1999 by the German parliament. The vote was 314 to 209 with 14 members abstaining. The project cost the German tax-payers 35.1 million euro. The 5.5 acre site covers an area the size of three soccer fields.

Before 1945, this location was part of the Ministry Gardens; it was adjacent to the large complex of buildings which included Hitler’s Chancellery. After the war, it was part of the “death strip” along the Berlin wall. The memorial covers an area very close to the underground bunker where Adolf Hitler committed suicide on April 30, 1945. There is no access to Hitler’s bunker which still exists underground.

On the first day that the memorial was open, disrespectful teen-agers used it as a playground and the site was desecrated with a swastika, which was quickly removed. The architect of the Memorial, Peter Eisenman, said that he was not worried about the threat of graffiti as he thought this might even make the Memorial more interesting. 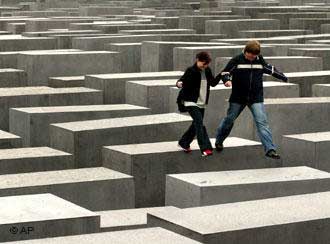 At the opening ceremony on May 10, 2005, Paul Spiegel, the head of Germany’s Central Council of Jews, sharply criticized the new Holocaust memorial, saying that it was too abstract and that it failed to confront the issue of German guilt. In his speech, Spiegel said that the Memorial for the murdered Jews of Europe honors the victims of Nazism, but the Memorial does not refer directly to the perpetrators. According to Spiegel, viewers are not confronted with questions of guilt and responsibility. Spiegel complained that the Memorial leaves an “incomplete message” and merely shows the Jews “as a nation of victims poured into 2,711 concrete pillars.” Spiegel said that the Monument fails to ask the question “Why?”