The present museum at Dachau was opened to the public on May 4, 2003, replacing the museum displays that had been set up in the same building on May 9, 1965. The 1965 museum featured huge photographs, like the one shown above. The photo in the display was taken in 1936 from the tower of the gate house. The camp was in transition at that time; the old buildings of the munitions factory were in the process of being replaced by wooden barrack buildings. 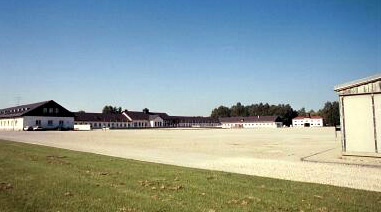 The Dachau museum is in the former service building

The photograph directly above shows the U-shaped service building, called the Wirtschaftsgebäude, which houses the Dachau museum. The 1965 Dachau museum was located in the center portion of this building; the east and west wings of the building were closed to visitors at that time.

The museum is located at the south end of the former concentration camp. On the left, in the photo above, is the east wing; the entrance to the 1965 museum was near the east wing. On the extreme right in the photo, you can see the end of one of the two reconstructed barracks, which were built as exhibits in 1965 after all the barracks buildings had been torn down. The small building in the background on the right is the duty building, which was called the Jourhaus. Above this building was guard tower A, which is shown at the top of this page.

New prisoners were brought to the camp through an iron gate in the center of the Jourhaus; the prisoners were then taken to the west wing of the service building where they went through an orientation procedure.

The photo below, taken in May 2001, shows the rear of the west wing of the administration building at Dachau. This part of the building was closed to visitors in 1965. Rear door to west wing where prisoners were registered

Incoming prisoners were first taken to the “shunting room,” called the Schubraum, in the west wing for registration. This wing of the service building now houses the first section of the Dachau museum, which was opened in May 2003.

The first museum at Dachau was set up in Baracke X, the crematorium building, by a former German inmate named Erich Preuss, under the auspices of the American Army, in 1945 soon after the camp was liberated. At that time, the Dachau concentration camp prisoners had been replaced by 30,000 German SS soldiers who were being held as accused war criminals. The museum was intended primarily to educate American soldiers about the Nazi atrocities in Dachau. On the orders of General Dwight D. Eisenhower, all the American soldiers stationed in Germany were encouraged to visit the Dachau museum and gas chamber in Baracke X.

While they waited for their turn in the proceedings of the American Military Tribunals, which began at Dachau in November 1945, the accused German war criminals were taken to visit this museum and forced to look at the gas chamber, which most of the German people claimed to have had no knowledge of. The German soldiers were ordered to stand only inches away from photos taken at Dachau after the liberation of the camp; then their faces were smashed against one of the photos. Most of these German soldiers had had nothing to do with the Dachau camp.

The photograph below was taken in the new 2003 museum, which has a display about this first museum. Shown in the photo on the display board is the waiting room which the gassing victims first entered, before proceeding to the undressing room and then into the gas chamber, which was disguised as a shower room. At that time, visitors were being told that the gas chamber at Dachau had been used to murder thousands of prisoners. When I first visited Dachau in 1997, visitors were being told that the gas chamber at Dachau was never used. On my last visit in 2003, the new Museum had a display which said that the gas chamber had been used a few times. The first Dachau museum was closed in 1953, after protests by the Bavarian government. In the photo above, visitors are looking at a display that includes wax dummies. The caption under the photo is in both German and English. The English version says: “Exhibition in the large crematorium, 1945 During the Dachau trials an exhibition displaying the punishments the prisoners were subjected to was set up in a room of the large crematorium.”

In the display, a wax dummy is bent over a whipping block while another wax dummy, dressed in a black SS uniform, holds a stick used for beating the prisoners. All punishments at Dachau and the other Nazi concentration camps had to be approved by the head office in Oranienburg. In 1942, Reichsführer-SS Heinrich Himmler, who was in charge of all the camps, ordered the whipping of prisoners to be stopped; the SS men were forbidden to “lay violent hands on the prisoners.”

The photo below shows the same whipping block displayed in the 1965 museum, but without the wax dummies. 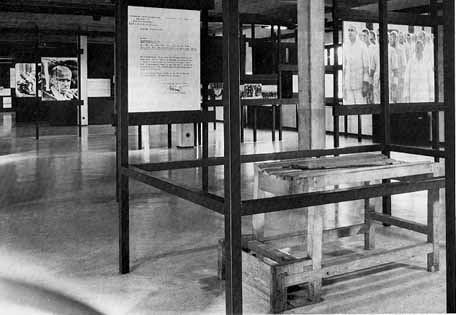 The 1965 museum included a large section near the entrance, which was entitled Historical Background to the “Third Reich.” This section, which was very educational, included numerous old documents and reproductions of posters.

The photo below shows one of the famous posters used by the Nazis, called “Der Dolchstoss,” which means “The stab in the back.” This was a reference to Hitler’s belief that the soldiers of World War I had been “stabbed in the back by the November criminals” who signed an Armistice to end the war on November 11, 1918. Hitler wrote in his book, “Mein Kampf,” that the idea that Germany had lost World War I in the field was a “Big Lie.” He accused the Jews of causing chaos on the home front which had led to Germany’s defeat. 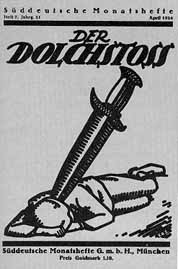 The English version of the museum information about this poster is quoted below, from the Museum guide book:

It was obvious to the Supreme Military Command several months before the end of the war, that, in military terms, Germany was already defeated. To avoid admission of this fact later, they spread the “Dolchstoss” legend in which they claimed that the army had in fact had real chances of winning the war, but that the fighting spirit had been broken by socialist subversive activities. Hindenburg confirmed this version before a government committee of inquiry. This lie was an insult to the Republic and played an important role in its eventual downfall.

The 1965 exhibits were planned and arranged by the International Committee of Dachau, an organization of mostly Communist political prisoners which was already in charge of the concentration camp when the American Army arrived on April 29, 1945. Except for the first section about the history of Germany, leading up to the Nazis coming to power in 1933, the museum was all about the suffering of the victims of the Nazis.

Anything which might have shown the perpetrators in a favorable light was deliberately left out of the 1965 museum displays, out of fear that the German people, who had not yet been rehabilitated, would regard the Nazis as heroes. For example, there was no information about the camp commandants and there were no wax dummies wearing the hated SS uniform.

The German criminals and the homosexuals who were imprisoned at Dachau were not mentioned in the 1965 museum; nor was there any mention of the VIP prisoners at Dachau who had private prison cells and were given special privileges. There was no mention of General Charles Delestraint who was allegedly shot just before the camp was liberated, nor of the four women British SOE agents who were allegedly executed at Dachau.

There was nothing in the 1965 museum about the accused German war criminals who were imprisoned at Dachau for 3 years after the war. Just before the 1965 museum opened, the wooden barracks buildings had been torn down, but there was no mention of the homeless German refugees who had lived in these barracks for 17 years.

The photograph below shows some displays in this second version of the museum, which was open from May 1965 to May 2002. Note that the photo in the foreground was taken in some other concentration camp, not at Dachau. The Dachau camp was surrounded on three sides by a wall and on the fourth side, there was a deep ditch which prevented the prisoners from getting close to the barbed wire. Portraits of political prisoners, taken in 1938

A large number of the photos on display in the 1965 museum were taken by the Nazis in 1938, including the portraits of Communist political prisoners shown in the photo above.

For the 1965 version of the museum, guide books in other languages were necessary for those who couldn’t read German. The first displays near the entrance were filled with information about the conditions in Germany that led up to the opening of the Dachau concentration camp in March 1933. According to the 1965 museum, there was a build-up of anti-Semitism in Germany, dating back to 1853. Copies of numerous documents were displayed in the 1965 museum; translations were provided in the guide books.

The museum now has captions in English on all the displays. When I visited the new museum in 2003, there was no guide book for the current displays, but the old guidebook was still available in the book store at a drastically reduced price.

The photo below shows a display in the 1965 museum with text in German only. 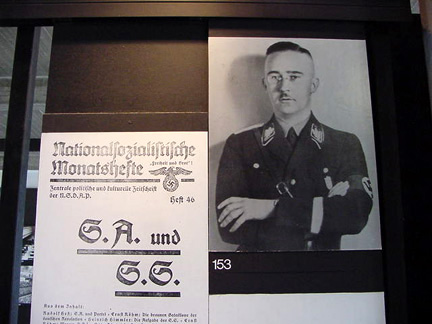 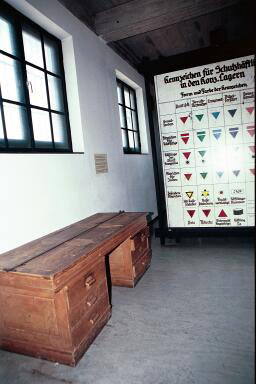 Desk and poster in 1965 Museum

The photo above shows a desk which purportedly held the camp records for Dachau. This is an ordinary office desk, made of oak. The Dachau concentration camp was in existence for 12 years and there were 206,206 registered inmates whose records were kept in this desk, according to the 1965 museum. In the new museum which opened in 2003, there are two desks on display.

In the background is a huge blow-up of a poster showing the triangles worn by the prisoners on their uniforms. A smaller version of this same poster is shown in the photo below.

In the 1965 museum, there was a display of wooden shoes, like those worn in Holland. I did not see any wooden shoes displayed in the new 2003 museum. All of the photos of the prisoners at Dachau, that I have ever seen, show them wearing heavy work boots, sometimes with wooden soles, but not wooden shoes.

There was also one striped prison uniform hanging in the 1965 museum, but no other artifacts were displayed.