“I recognize that after the battle of Normandy my unit was composed mainly of young, fanatical soldiers. A good deal of them had lost their parents, their sisters and brothers during the bombing. They had seen for themselves in Köln thousands of mangled corpses after a terror raid had passed. Their hatred for the enemy was such, I swear it, I could not always keep it under control.” SS Standartenführer Jochen Peiper, 1st SS Panzer Division, Leibstandarte-SS Adolf Hitler 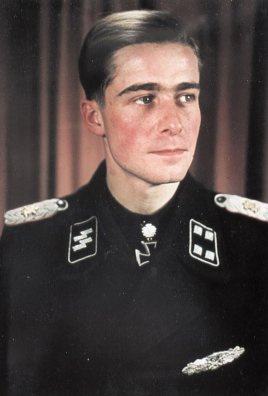 Joachim Peiper, one of the accused in the Malmedy Massacre

Following the defeat of the German Army in World War II, the Judge Advocate Department of the Third US Army set up a War Crimes Branch which conducted 489 court proceedings in which 1,672 German war criminals were charged. This was apart from the proceedings against the major German war criminals before an International Military Tribunal at Nuremberg. Most of the secondary proceedings conducted by the American occupation forces were held at Dachau, on the grounds of Germany’s most infamous horror camp, between November 15, 1945 and 1948.

The most controversial of the Dachau proceedings, and the one that is still discussed to this day, is the infamous Malmedy Massacre case against the Waffen-SS soldiers who were accused of the murder of American Prisoners of War and Belgian civilians during the intense fighting of the Battle of the Bulge.

The Malmedy Massacre, or the shooting of 84 American soldiers who had surrendered, took place on December 17, 1944, the second day of the Battle of the Bulge. After the war, during the summer of 1945, the US occupation authorities rounded up over 1,000 former soldiers in the 1st SS Panzer Division and interrogated them. Seventy-five of them were originally charged as war criminals in the Malmedy case. One of those who were charged was 18-year-old Arvid Freimuth who committed suicide in his cell before the trial started. Charges were dismissed against Marcel Boltz after it was learned that he was a French citizen. That left 73 men who were ultimately prosecuted by the American Military.

The Malmedy case became officially known as U.S. vs. Valentin Bersin, et al. Bersin’s name was the first in the alphabetical list of the accused, and he was the first to be sentenced to death for killing Belgian civilians in the village of Wanne.

The proceedings in the Malmedy Massacre case started on May 12, 1946 and the verdicts were read on July 16, 1946. All of the 73 men on trial were convicted and 42 were sentenced to death by hanging. The list of the names of the 73 men are on a separate page.

Although popularly known as “the Dachau trials,” these court proceedings by the American Military Tribunal at Dachau were not conducted like a typical trial in the American justice system. Guilt was established beforehand by interrogators assigned to obtain confessions from the accused who were then presumed guilty; the burden of proof was on the defense, not the prosecution. A panel of American military officers acted as both judges and jury and the defense attorneys were also American military officers. The judges took judicial notice of the crimes that were allegedly committed, which meant that the defense was not permitted to argue that the crimes had not taken place. Hearsay testimony was allowed and affidavits could be submitted by witnesses who did not appear in the courtroom and thus could not be cross examined by the defense.

In some of the proceedings at Dachau, the prosecution witnesses were paid to testify. Some of the accused were not permitted to testify in their own defense. Thus the outcome of the Malmedy Massacre proceedings was never in doubt.

The accused in the proceedings included General Josef “Sepp” Dietrich, commander of the Sixth Panzer Army, who was a long-time personal friend of Adolf Hitler, and Col. Jochen Peiper, the commanding officer of “Kampfgrüppe Peiper,” the armored battle group which spearheaded the German attack in Hitler’s Ardennes Offensive, better known to Americans as the Battle of the Bulge. Peiper’s rank was the equivalent of an American Lt. Col. when he was assigned on December 16, 1944 to lead the tank attack, but after the battle, he was promoted to Colonel. Peiper preferred to be called by his nickname, Jochen, rather than his real first name, Joachim.

Both Peiper and Dietrich were members of the “Leibstandarte-SS Adolf Hitler,” an SS outfit which was established in 1933 under the command of Dietrich. SS stands for Schutzstaffel which means “Protection Squad” in English. The SS was an elite group that was separate from the regular German army, which was called the Wehrmacht. The Schutzstaffel had started out as a private protection squad, whose purpose it was to personally guard Adolf Hitler.

Another branch of the SS was the SS-Totenkopfverbände, which served as the guards in the concentration camps. The SS was a unique branch of the German armed forces; it was a volunteer army which had many divisions made up of recruits from almost every country in Europe. The Waffen-SS soldiers swore an oath of loyalty to Adolf Hitler, rather than to their country, as did the Wehrmacht soldiers. 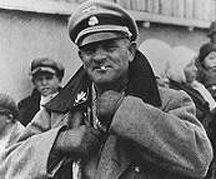 The SS men was more hated by the Americans than the regular Wehrmacht soldiers. The men in all the SS Panzer (tank) divisions wore the Totenkopf or Death’s Head symbol on their visor caps, the same symbol that was also worn by the Einsatzgruppen when they followed behind the troops, killing the Communists and Jews, when the German Army invaded Russia on June 22, 1941, and the same symbol that was worn by the guards in the Nazi concentration camps.

Dachau was selected as the site for the German war crimes proceedings that were conducted solely by the American military, partly because of the abundant housing available at the former concentration camp and the huge SS Training Camp there, but primarily because it was the place most associated with German atrocities in World War II. The mere mention of the word “Dachau” was enough to convince most people of the guilt of any accused German war criminal. The American prosecutors in the Dachau proceedings, most of whom were Jewish, had only to walk a few yards to the infamous gas chamber, that was located just outside the former Dachau concentration camp, to know what the Germans were capable of. 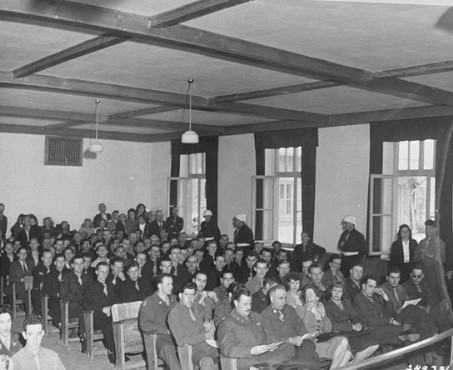 Lt. William Perl, an Austrian Jew who had emigrated to America in 1940, was the chief interrogator of the Malmedy Massacre accused. Perl was an active Zionist who had worked to get European Jews into Palestine illegally before he came to America. His wife was a survivor of Ravensbrück, the Nazi concentration camp for women, where she was sent in 1943. Perl was assisted by other Jews on the interrogation staff, including Josef Kirschbaum, Harry Thon and Morris Ellowitz. The Americans needed all the help they could get from native German speakers which is the reason that German Jewish refugees were used in the investigative process.

The chief prosecutor, called the Trial Judge Advocate, was Lt. Col. Burton F. Ellis, a Jewish attorney who had no prior experience in a military courtroom. He took over the case which had been handled by Dwight Fanton during the interrogation phase. His chief assistant prosecutor was Raphael Schumaker.

The lawyer for the defense was Lt. Col. Willis M. Everett, who had never been involved in a criminal case before, had never fought in combat, couldn’t speak German, and had only just arrived in Germany a few weeks before the proceeding began. On the opening day, Everett and his defense team had not yet interviewed all 73 of the men they were representing in the court room.

Everett was ably assisted by Herbert J. Strong, a civilian attorney who had volunteered to work on the war crimes military tribunals. Strong was a German-born Jew who had emigrated to America after the Nazis came to power. Except for the accused, most of the people in the courtroom were Jews, including two of the court reporters, and it was understandable that they had nothing but hatred and contempt for the ruthless and sadistic SS men. 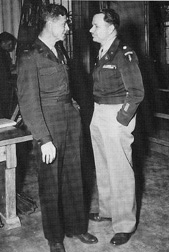 Lt. Col. Everett on the left, Lt. Col. Ellis on the right

A panel of high-ranking American army officers acted as both judge and jury. Seven members of the panel are shown in the photograph below. The president of the panel was Brigadier General Josiah T. Dalbey, who is the fourth man from the left in the photo. The dominant member of the panel, Col. Abraham H. Rosenfeld, was the “law member,” who ruled on all motions and legal matters during the proceeding.

Col. Rosenfeld was Jewish, and a graduate of Yale. He had had experience in over 200 court martial cases before coming to Dachau in March 1946. “Rosenfeld” was a name that was very familiar to General Dietrich because his close friend, Adolf Hitler, always referred to President Franklin D. Roosevelt by that name, claiming that FDR was both a Communist and a Jew. 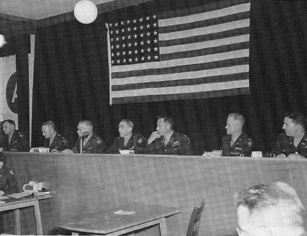 Col. Rosenfeld sits under the flag with his hand on his chi

Of all the proceedings before the American military tribunal at Dachau, the one that was the most highly publicized was the Malmedy Massacre case. The proceedings were filmed and scenes were shown in the newsreels in American theaters. The accused complained that they were being blinded and cooked by the hot lights needed for the movie cameras. This case was important because every school child in America knew the name of the Battle of the Bulge. It was the most decisive battle on the Western front, the battle in which the Allies crushed the enemy army, leading to Germany’s final defeat.

Besides bringing war criminals to justice, the Nuremberg and Dachau military tribunals were designed to educate the public, both in Germany and in America, that World War II was “the Good War,” the war fought by the American good guys against the German bad guys, who were rotten through and through, from their evil leader right down to the teenagers who died defending their country. The purpose of the Dachau military tribunals was to establish once and for all that the Germans had committed unspeakable atrocities, which were all part of an evil conspiracy masterminded by Adolf Hitler.