“And in this whole time, during the desperate struggle for a bowl of watery turnip soup there is a continuous commotion in the crowd, a clamour and hubbub carried on in the narrow passages between the bedsteads. Chamber-pots are being carried from one end of the hut to the other, are being emptied or filled. And all this keeps going on like this, eternally, these eternal chamber-pots, if only because of the children, the sick. And in all this confusion and tumult, in which soup, smells and excrement are passing by, where brooms are raising dust, grown-ups are screaming and children are crying, “hawkers” walk around tirelessly, shamelessly, obtrusively, and just as miserable as their customers. They swap some rags for bread, bread for cigarettes and vice versa. This strange business is accompanied by long discussions and unending negotiations. Boundless misery, shamefully put on show, stinking and howling. That is exactly what the Nazis wanted. Exactly this. To humiliate us to this infamous, animal degree, to drive us insane, and to kill even our innermost memory that we were once human beings.” Hann Levy-Hass, Diary Notes, Sept. 1944 – April 1945

Ironically, although 50,000 civilian prisoners and another 50,000 Russian Prisoners of War died at Bergen-Belsen, the US Holocaust Memorial Museum in Washington, DC does not call it a “death camp.” The term “death camp” is reserved for only six camps, all of them in what is now Poland, where Jews were gassed to death as part of Hitler’s Final Solution to the Jewish Question. According to the USHMM, the six “death camps” were Chelmno, Belzec, Sobibor, Treblinka, Majdanek and Auschwitz-Birkenau.

When Bergen-Belsen first came into being in April 1943, it was called an Aufenthaltslager, which means a holding camp. Its purpose was to hold prisoners who were suitable for exchange with the Allies for German citizens being held in internment camps in America and Great Britain. Although Bergen-Belsen was, from the beginning, under the jurisdiction of the camp administration in Oranienburg, near Berlin, it was not until December 2, 1944 that it was designated a concentration camp.

According to a Bergen-Belsen Memorial Site booklet, the Bergen-Belsen exchange camp was not called a civilian internment camp because this would have meant that access had to be allowed by international commissions according to the Geneva convention. That is why the term Aufenthaltslager, which means “camp of staying,” was used instead.

According to Yehuda Bauer, in his book “Freikauf von Juden?” published in 1994, Hitler authorized the exchange of Jewish prisoners for German citizens, or for ransom money, on December 10, 1942. This was almost a year after the Wannsee Conference, at which the Final Solution was planned on January 20, 1942.

In a book entitled “Bergen-Belsen from 1943 to 1945,” author Eberhard Kolb quoted from a Decree by Heinrich Himmler to SS Lt. General Müller regarding Hitler’s wishes “that Jews still present in France, as well as all those Hungarian and Roumanian Jews who have influential relatives in America, be assembled in a special camp. They are to work there but under such conditions that they remain healthy and alive. These types of Jews are valuable hostages for us. I imagine them to number about 10000.”

The booklet published by the Memorial Site at Bergen-Belsen says the following:

In February 1943 the Foreign Office proposed that about 30,000 Jews who had contacts to “enemy states” should not be deported to death camps for the time being. Instead they were to be detained with a view of exchanging them for Germans who had been captured by the allies. In April 1943, the head of the SS, Reichsführer Himmler, ordered the transport of 10,000 so called “exchange Jews'” (Austauschjuden) into a central camp. For this purpose, the SS had requisitioned, from the German army, parts of the prisoner of war camp Bergen-Belsen including the accommodation huts. The “detention camp Bergen-Belsen” came into existence. By the autumn of 1944, about 6,000 Jews who were selected for exchange, had been brought here.

The initial plan for the Bergen-Belsen exchange camp was to detain as many as 30,000 Jews for exchange with the Allies for German citizens being held in Internment, but as it turned out, there were only 358 of the Jews at Bergen-Belsen who obtained their freedom through a genuine exchange for other prisoners.

The most well-know exchange group consisted of 222 Jews who were selected in April 1944 from approximately 1300 holders of certificates for Palestine. This group finally left for Istanbul via Vienna and Budapest on June 30, 1944 and reached Haifa on July 10, 1944.

The second group that was exchanged consisted of 136 Jews who left Bergen-Belsen on January 21, 1945 and arrived in Switzerland on January 25, 1945. A total of 301 Bergen-Belsen inmates, who were citizens of South American or Central American countries, had left the camp on the 21st of January, but 165 of them were taken to civil internment camps at Biberach and Ravensburg.

The majority of the prisoners in the detention camp were forced to work. There was a “shoe commando” which worked on salvaging usable bits of leather from old shoes which were sent to Bergen-Belsen from Germany and all the countries that they occupied. 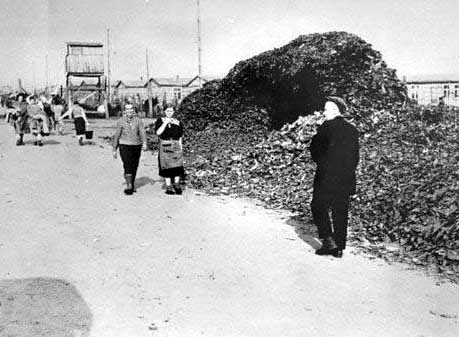 Dr. Abel J. Hertzberg, a distinguished lawyer from Amsterdam, was one of the Jews in the Star Camp who worked in the “shoe commando.” He had been arrested, along with his wife in 1943 and sent to Westerbork, a transit camp in the Netherlands. He was put on the “Palestine list” and was sent to the Bergen-Belsen detention camp in January 1944 to await an exchange transport. He was chosen for such a transport in the summer of 1944, but at the last minute, he was sent back to the Star Camp.

He kept a diary which he published after the war under the title Tweestromenland, dagboek uit Bergen-Belsen (Between Two Streams, A Diary from Bergen-Belsen). The book was translated from the original Dutch into English by Jack Santcross, who survived Bergen-Belsen as a nine-year-old fellow inmate of Herzberg.

The following exceprt from his diary, written on August 29, 1944, is from the special English edition of a book by Eberhard Kolb, entitled “Bergen-Belsen from 1943 – 1945,” which was translated from German into English by Gregory Claeys and Christine Lattek.

What does our work consist of? Mainly in unstitching the seams of old shoes and in cutting out the leather pieces that can still be used. It is work for idiots and – obviously – terribly dirty work. If one asks the Lance Sergeant who acts as overseer what the use of all this is he says: “We German are have-nots, and you Jews shall help to make us rich by your work.” Naturally we take this lesson in German political economy very much to heart. We burn with zeal to “make Germany rich” by unstitching shoes. And now a permanent and stubborn dispute develops between us Jews and the Lance Sergeant about the degree of efficiency of our labour. One thing is certain: under no circumstances can we allow the suspicion to arise that we are committing sabotage, because sabotage means the concentration camp at the very least. Hence something absolutely needs to be done. The only question is: how much or how little. Some manage to do as good as nothing. Records are kept about the amount of old shoes that are collected. The bookkeepers are Jews but of course they can fiddle the figures only within certain limits. Therefore the most ingenious methods are invented to cheat the Lance Sergeant. For example, we fetch shoes from the huge pile, have a figure recorded which is greatly “rounded off” upwards, and return moreover the said shoes in total or in part to the large heap again. If then one of the Lance Sergeants simply fails to understand why productivity is so low and why the pile does not get any smaller, then for a moment at least the Jews, too, have their fun. 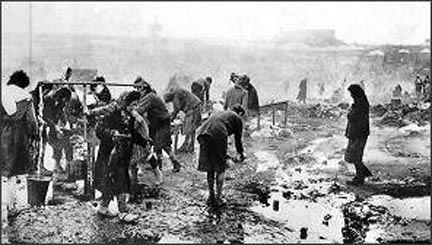 Bergen-Belsen survivors after the liberation