As you exit from the rear of the Visitor’s Center at the Auschwitz Museum, you see the infamous “Arbeit Macht Frei” gate immediately on your right. The words mean “Work will set you free.” This gate was the main entrance into Auschwitz I until the camp was expanded in late 1941.

The photo above shows the Arbeit Macht Frei gate into the Auschwitz I main camp. It was through this gate that the prisoners walked each morning on their way to work in the factories, marching to the beat of music played by the camp orchestra, stationed in front of the kitchen building near the gate. Ten hours later, the prisoners marched back through this gate in the evening, again to the accompaniment of classical music. Newly arriving prisoners were also greeted by orchestra music as they passed through this gate after being registered in the camp. Auschwitz 1 was also a transit camp for prisoners who were waiting to be transferred to another camp. The first building that you see on the left side, after walking through the gate, is Block 24, which now houses the Auschwitz archives and the office of the Museum director. Block 24 was formerly used as a brothel for the Polish political prisoners; the camp library was on the first floor. Block 24 also housed the prisoner’s art museum, where their artwork was exhibited. A sign near the corner of Block 24 tells visitors that the corpses of prisoners, who were executed because they had attempted to escape, were often displayed here as a warning. There is no sign which identifies Block 24 as the former camp brothel and camp library. 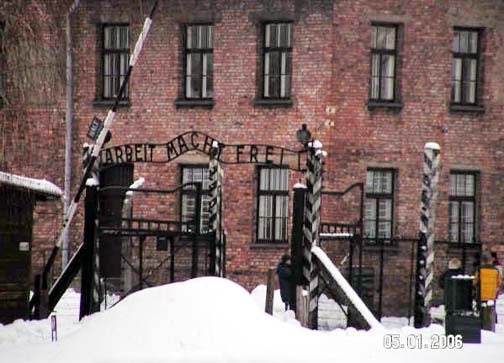 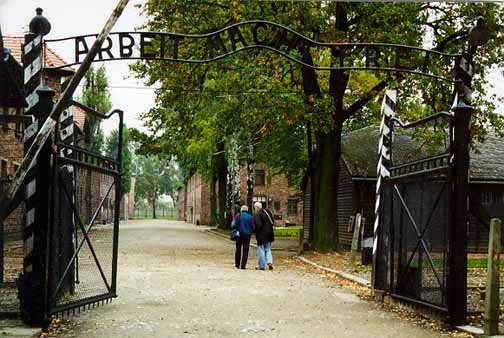 The building on the far right in the photo above is the camp kitchen; it was painted black when I visited the camp in 1998, but the original white paint was restored some time after 2005 when I last visited. The camp orchestra played where a large tree now stands at the end of the huge kitchen building. The inmates at the Auschwitz 1 camp were mainly non-Jewish political prisoners; Jewish prisoners were sent to the Auschwitz II camp, also known as Birkenau. It was at Birkeanu that more than a million Jews were killed, mainly in gas chambers, beginning in February 1942. 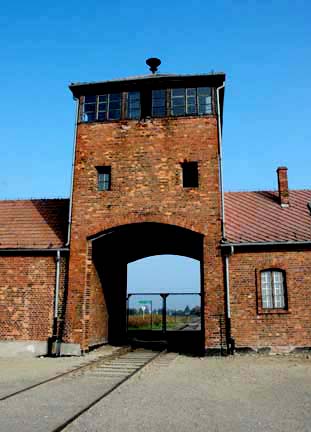 Gate into Auschwitz II, the death camp, had no sign

Commandant Rudolf Hoess, who had served at both Dachau and Sachsenhausen before becoming the first Commandant of Auschwitz I in June 1940, ordered the Arbeit Macht Frei sign to be placed over the original gate into the camp. He wrote in his autobiography that the words “Arbeit Macht Frei” mean that works sets one free spiritually, not literally. According to the Auschwitz Museum, approximately 1,500 prisoners were released from Auschwitz 1.