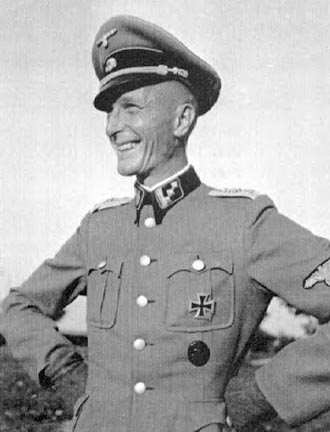 The man in the photo above is Adolf Otto Diekmann, the battalion commander who was the highest ranking officer present at Oradour-sur-Glane on June 10, 1944 the day that 642 men, women and children were murdered and the whole town was destroyed by fire. In most books, his name is given as Otto Dickmann; SS records show that his name was Adolf Otto Diekmann. It was common for German men at that time to use their middle name.

After the massacre at Oradour-sur-Glane Diekmann made a report at 5:30 p.m. that day to his commanding officer at the Regimental Headquarters in Limoges.

The following quote from Diekmann’s Report was included in Otto Weidinger’s book, “Comrades to the End”:

The Company had encountered resistance in Oradour, the bodies of executed German soldiers were found. It then occupied the village and immediately conducted an intensive search of the houses. Unfortunately this failed to turn up Kämpfe, however large quantities of weapons and ammunition were found. Therefore all the men of the village were shot, who were surely Maquisards.

The women and children were locked up in the church while all this was going on. Then the village was set on fire, as a result of which the ammunition that was stored in almost every house went up. The burning of the village resulted in fire spreading to the church, where ammunition had also been hidden in the roof. The church burned down very rapidly and the women and children lost their lives.

The “executed German soldiers” mentioned in the report was a reference to wounded German soldiers in an ambulance who had been burned alive. The driver and another soldier sitting in the passenger seat had been chained to the steering wheel before the vehicle was set on fire. There were also bodies of German soldiers found in an old well in Oradour-sur-Glane.

Diekmann was court-martialled but the charges were dropped after he was killed in action on June 29, 1944 at Normandy.

Robert Hebras, one of the 5 survivors of the Laudy barn, wrote a book called “Oradour-sur-Glane, the Tragedy Hour by Hour,” in which he described Diekmann as a “blood-thirsty man” and said that “Major Dickmann was a man whose callousness had earned him the reputation of a cold, cruel butcher, and a drunkard besides.”

Diekmann lies buried in the huge La Cambre Cemetery at Normandy where the bodies of 21,115 German soldiers were laid to rest. During the 60th anniversary ceremonies at Normandy, German Chancellor Gerhard Schroeder took part, but he made it a point not to visit La Cambre to pay his respects to the German soldiers who gave their lives for their country. 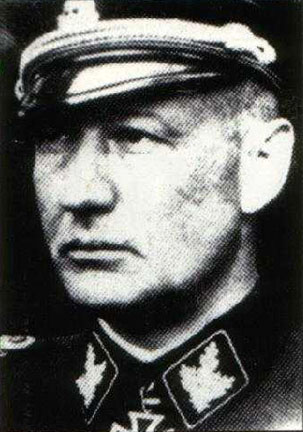 Beginning in 1943, Das Reich Division was under the command of General Heinz Bernard Lammerding, who is shown in the photo above. The Center of Memory in Oradour-sur-Glane maintains that General Lammerding gave the order to destroy the village before the soldiers went there. This accusation is based on a memorandum, dated June 5, 1944, in which Lammerding outlined the measures to be taken in areas where the French resistance was fighting as illegal combatants in defiance of the Armistice signed by France in June 1940, and on an Order of the Day issued on June 9, 1944. This order, entitled “The Position with Regard to Guerrilla Bands and Tactics for Combatting Them,” explicitly mentioned the reprisals that were to be taken against the insurgents. Reprisals were legal under the Geneva Convention of 1929.

Lammerding lived out his days in West Germany, working as a civil engineer, and died in 1971. He was never brought to trial, but was convicted in absentia in 1951 for ordering a reprisal in response to the murder and mutilation of captured German soldiers in Tulle on June 9, 1944. He was again convicted in absentia in 1953 for ordering the reprisal against Oradour-sur-Glane on June 10, 1944, a charge which he denied.

The photo above shows Sylvester Stadler, who was Diekmann’s commanding officer. When Stadler heard about the massacre and the destruction of Oradour-sur-Glane, he reported Diekmann to Brigadeführer Heinz Lammerding and requested that Diekmann be court martialled for exceeding his orders. Diekmann was court martialled but never brought to trial since he was killed in action a few weeks later. His fellow officers said that Diekmann was distraught; they believed that Diekmann committed suicide by deliberately getting himself killed in battle. 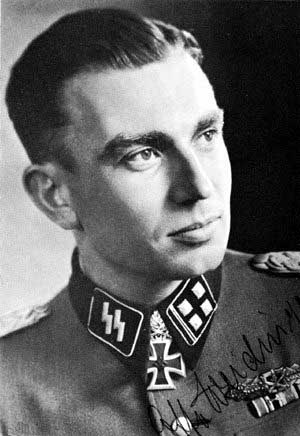 The photo above is a formal portrait of Otto Weidinger, who was the last commander of Der Führer regiment in Das Reich Division. Weidinger defended Diekmann’s actions in ordering the destruction of Oradour-sur-Glane; he testified for the defense at the trial of 21 of the perpetrators in 1953.

Weidinger wrote a book about his regiment, entitled “Comrades to the End,” in which he said that Diekmann had the authority to order a reprisal action under the Sperrle Order given on February 3, 1944. Weidinger also claimed that he had met Rene Jugie, the former Maquis chief for the Dordogne, who went by the name Gao, in 1969 in Paris. Jugie admitted that Oradour-sur-Glane had indeed been filled with weapons and ammunition. It was, in fact, the supply center for weapons for all the towns and villages in the Dordogne, according to Weidinger’s account of his meeting with Gao. 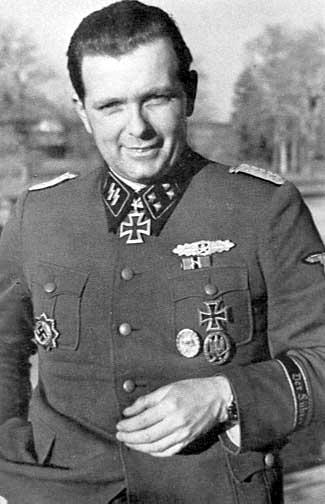 The man in the photo above is Major Helmut Kämpfe, the commander of Der Führer Battalion 3, who was kidnapped by members of the FTP, the French Communist resistance, on 9 June 1944. The SS soldiers claimed that the reason for going to Oradour-sur-Glane on June 10, 1944 was to look for Kämpfe, an officer who was very well liked and a close friend of Adolf Diekmann. On the day of the massacre, Diekmann had been given information about Kämpfe by two collaborators in the Milice, the French secret police which helped the German Gestapo. Allegedly, the French resistance fighters in Oradour-sur-Glane were going to execute Kämpfe by ceremoniously burning him alive that day. Kämpfe was the highest ranking officer ever to be captured by the resistance. His execution was to be a big event.

Kämpfe was killed by the French resistance, but not at Oradour-sur-Glane. His place and date of execution was allegedly in Breuilaufa, a village just north of Oradour-sur-Glane, on 10 June 1944, although some sources say that his burned body was found in Oradour-sur-Glane. As illegal combatants, who were fighting in violation of the Geneva convention of 1929, the Communist resistance fighters didn’t bother with such niceties as the rules of the Geneva Convention with regard to Prisoners of War.

From his photo, Kämpfe appears to be a pleasant and likable fellow, and it seems that he had earned a lot of medals for his heroic actions while he was fighting the Communists on the eastern front. 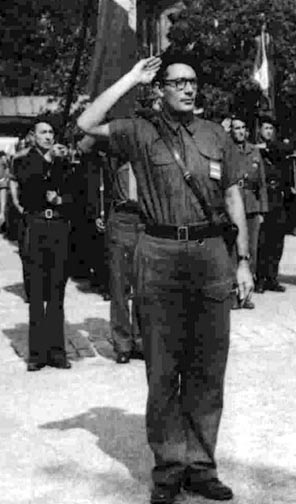 Helmut Kämpfe was kidnapped by FTP fighters, led by Jean Canou, and turned over to Guingouin, the Communist leader who probably ordered his death on the day that the village of Oradour-sur-Glane was destroyed.