Execution of Soviet POWs at Buchenwald

Measuring device with slit through which shots were fired 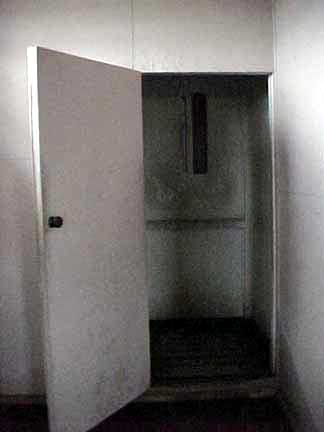 Room where shooter stood behind the slit in the measuring device

The Buchenwald camp guidebook says that 8,000 Soviet Prisoners of War were executed in Buchenwald. They were killed according to the Commissar Order (Kommissarbefehl) issued by the supreme command of the Germany army.

Rudolf Höss, the former Commandant of Auschwitz, wrote the following in his autobiography, regarding the execution of Soviet POWs who were Communist Commissars:

The reason for this action was given as follows: the Russians were murdering any German soldier who was a member of the Nazi party, especially SS members. Also, the political section of the Red Army had a standing order to cause unrest in every way in any POW camp or places where the POWs worked. If they were caught or imprisoned, they were instructed to perform acts of sabotage.

These executions under the Commissar order were carried out by a special detachment known as Kommando 99 in Buchenwald. The execution site was the horse stable, a brick building, 55 meters long, which was next to the Riding Hall where Commandant Koch and his wife Ilse rode their horses indoors, while the SS orchestra played military marches.

In the horse stable a measuring device of the type used in a doctor’s office was put on the wall. A narrow slot in the device allowed the executioner to shoot the prisoner in the neck from a booth behind the wall. According to the guide book “military marches sounded through the building” to drown out the noise of the shots. The dead bodies were removed in large galvanized containers, an example of which is on display in the pathology lab next to the crematorium.

A movie shown at the Sachsenhausen Memorial Site in 1999 explained that the victim was told to stand with his back against the wall a few feet away from the measuring device, and then side step until he was in front of the device. This prevented the victim from noticing the obvious slit in the measuring device and becoming aware of the gun pointed at him from behind the wall. The Commandant of Sachsenhausen confessed to the Soviet liberators that he had invented this device for murdering Soviet POWs and also that POWs were killed in a gas chamber disguised as a shower room at Sachsenhausen.

At the American Military Tribunal proceedings at Dachau in April 1947 against the staff of the main Buchenwald camp, Horst Dittrich, a member of the SS staff at Buchenwald, testified for the prosecution. Under interrogation, Dittrich had confessed to the crime of executing Russian POWs at Buchenwald and was awaiting his own trial in a subsidiary case. The Russian POWs who were executed had been determined to be Commissars in the Communist party who had been ordered to organize escape attempts and make trouble in the camps.

During his testimony, Horst Dittrich had no explanation for why this surreptitious and inefficient method of killing was allegedly used to murder 8,000 Russians at Buchenwald, even though the execution of the Commissars had been ordered by the Reich Security Main Office on the authority of Adolf Hitler himself. Dittrich testified that the room had to be cleaned with a water hose after each execution.

At Dachau, 6,000 Russian Commissars were allegedly taken to a firing range outside the camp and executed, although this was not proved at the proceedings against the Dachau staff.

The measuring device was only used in executions at Buchenwald and Sachsenhausen, which were both in the post-war occupation zone of the Soviet Union, but not at Dachau which was in the American zone of occupation.