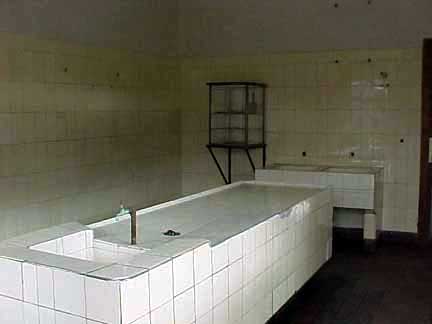 Autopsy table in pathology department in the crematorium

An annex built onto the crematorium housed the pathology department where autopsies were done. According to the camp guidebook, “Except for those killed during mass executions, all dead bodies were first sent to the pathology department. Gold teeth were pulled out here, various medical specimens were prepared and even artifacts were made which consisted of tanned human skin and which were needed to satisfy the personal demands of the SS.” A sign in the pathology lab says that autopsies were performed to establish a fake cause of death for prisoners who were actually murdered.

The photo above shows the table where autopsies were performed on dead prisoners. The camp doctors were conducting medical experiments on prisoners in an attempt to develop a vaccine for typhoid fever, according to the camp guidebook. The German term for typhus is “spotted fever” which Americans translate as typhoid fever, although the German term refers to typhus. It was typhus which was epidemic in all the German camps, beginning in December 1944.

General George S. Patton mentioned in his autobiography that Buchenwald had “a number of allegedly eminent physicians” who were performing “some very abominable experiments on their fellow inmates.” The only medical experiment that Patton sited as an example was one in which 800 patients in the camp were “inoculated with anti-typhus vaccine and then inoculated with the typhus bug.” The vaccine was a failure, and 700 out of the 800 died of typhus. On the same page, he wrote, “One of the interesting things to be seen in flying over Germany is the large number of swimming pools. Practically every little town has one. I think it must have been in line with their health movement.”

According to the March 1945 issue of the Red Cross monthly bulletin, American soldiers held as POWs in German camps were given typhus vaccine, which was delivered by the Red Cross and distributed by the Germans. Since this vaccine was only given to Americans, the Germans were working to develop their own vaccine for the rest of the prisoners and for the German Army.